Thanks to technology, college students no longer have to travel to campus if they want to earn a degree. Online programs are making it simple for people to study from the comfort of their own home, and it's an option many busy adults are taking advantage of in order to complete their education.

In fall 2013, more than one in four college students — 5.5 million in all — took at least one distance education course, and 2.7 million studied exclusively online or through distance learning. That's according to data released by the National Center for Education Statistics in 2016.

However, not all states are equal when it comes to online learning. While some states have limited online education opportunities, others have no shortage of schools and programs from which both in-state and out-of-state students can choose.

Using a methodology that looked at these and other factors, OnlineColleges.com ranked the best states for online college students in 2016.The results are below:

Arizona didn't even make the top 10 in last year's analysis, but in 2016, it debuted in the No. 1 spot. One reason for its high ranking is the number of students in the state who already utilize online education options. Nearly six in 10 students at all levels were enrolled in distance education for the 2014-2015 school year. This makes the state the first in the nation for distance education participation. That number could go up too as the state's Achieve60AZ initiative seeks to make higher education more accessible and affordable. The initiative aims to have 60 percent of Arizonans hold a degree or certificate by 2030. 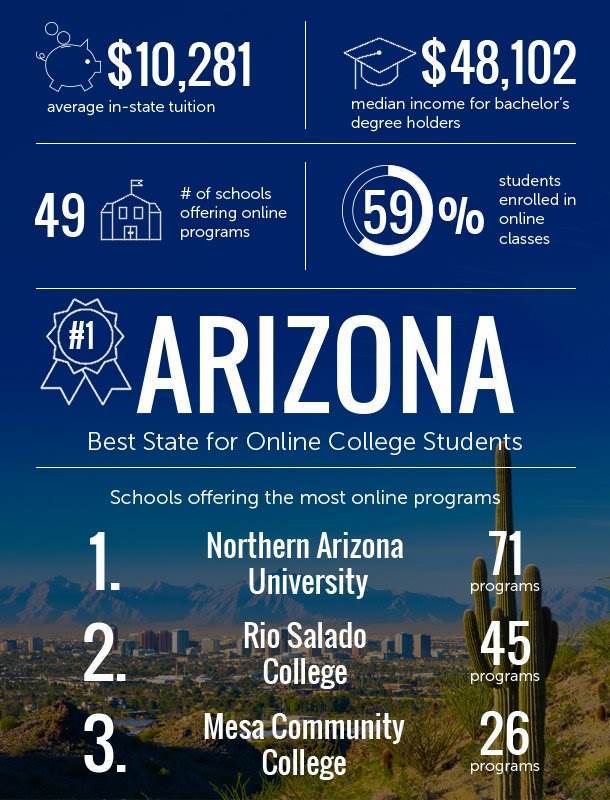 The View from Inside
Rita Cheng
President
Northern Arizona University

Q: How do you see online learning growing at Northern Arizona University and in Arizona in general?

A: Northern Arizona University has been a leader in bringing high-quality education options to new audiences, in formats that work with the needs of nontraditional students. Over the last decade, enrollment in our online programs has almost tripled. Our Personalized Learning program offers an online learning platform that is centered on the student's real-world career experiences. We will soon be adding more degrees, including a graduate program in computer information technology we plan to launch next year.

While Florida was already among the best states for online college students in 2015, it jumped seven places to the second spot this year. The wide range of online education choices is one reason for the state's movement up the rankings. Florida is fourth in the nation for the number of schools that offer distance education programs, and students had more than 1,400 online programs from which to choose during the 2015-2016 school year. 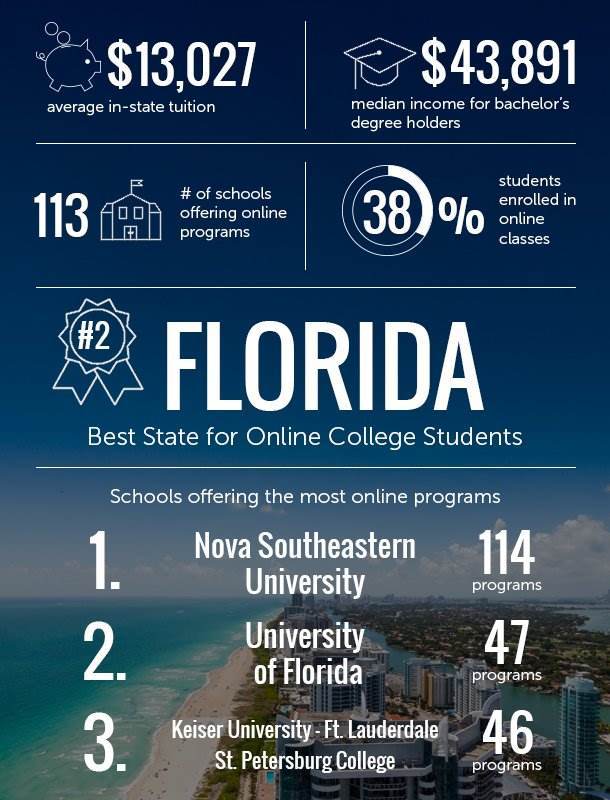 Q: What do you think makes online education in Florida great?

A: Florida has done a great job in ensuring that online students at the state colleges and universities have quality courses as well as important support services. For example, at St. Petersburg College we make sure a student studying late at night has access to tutors or library services from their home – they don’t have to come to campus to get the help they need. There is a commitment to providing a complete college experience to all students.

Florida’s state colleges and universities also work in partnership to make sure student credits transfer easily. As an example, St. Petersburg College has the FUSE program with University of South Florida which allows students to begin with us and transition seamlessly to USF for programs where we don’t have a 4-year degree.

Online students also have plenty of options in North Carolina. The state is ranked seventh in the nation for the number of schools offering distance education, and more than 1,000 programs were available to students during the past year. Business, education and healthcare were the most common subjects offered by schools, but students can find online education options in many other topics and at a variety of degree levels. North Carolina moved up four spots from its rank on the 2015 list. 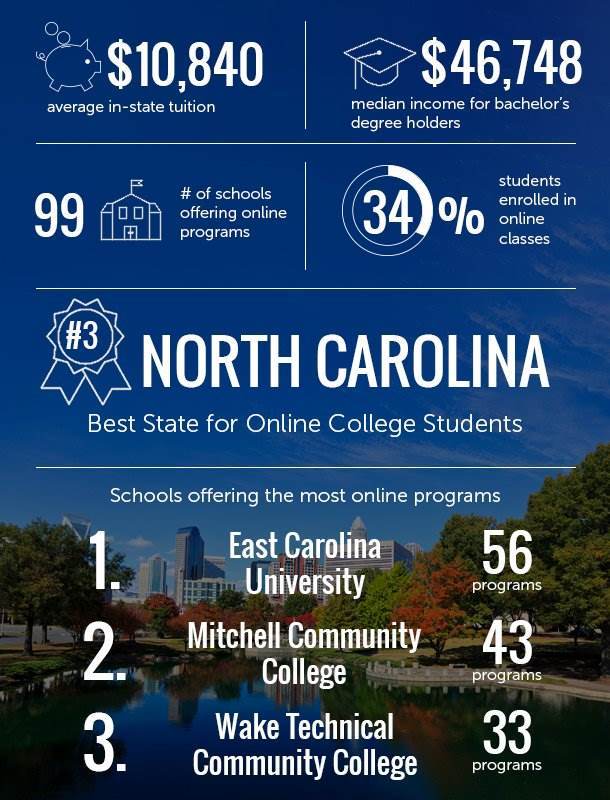 Q: How do you see online learning growing at East Carolina University and in North Carolina in general?

A: East Carolina University is said to have one of the first fully online graduate programs in the country. Online programs at ECU have grown substantially over the past 20 years in large part guided by ... the commitment of the university to bring faculty from the academic colleges to teach online students the same courses, with the same academic rigor, as those on our campus in Greenville. ECU is in a strong leadership position in that more than 90 of its programs are available online, with 40 of those online programs being unduplicated within the UNC system.

The state of North Carolina encourages online learning through supportive infrastructures. UNC Online … bring[s] together the UNC constituent institutions to share best practices in serving adult learners, increasing the numbers of citizens with degrees, impacting economic development, entrepreneurship, and innovation through connections with diverse faculty that would not be available without online connectivity.

By 2030, Texas hopes to have a postsecondary certificate or degree in the hands of 60 percent of its 25-to-34-year-old population. The 60x30TX plan was introduced in 2015 and may have helped play a role in the state moving from the sixth to fourth spot on the best states for online college students list for 2016. The state added 486 new distance education programs between the 2012-2013 and 2014-2015 school years. This makes Texas first in terms of the number of programs offered to online college students. The Lone Star State is also second in the nation for both the number of schools offering distance education and the median income of bachelor's degree holders, when adjusted for cost of living. 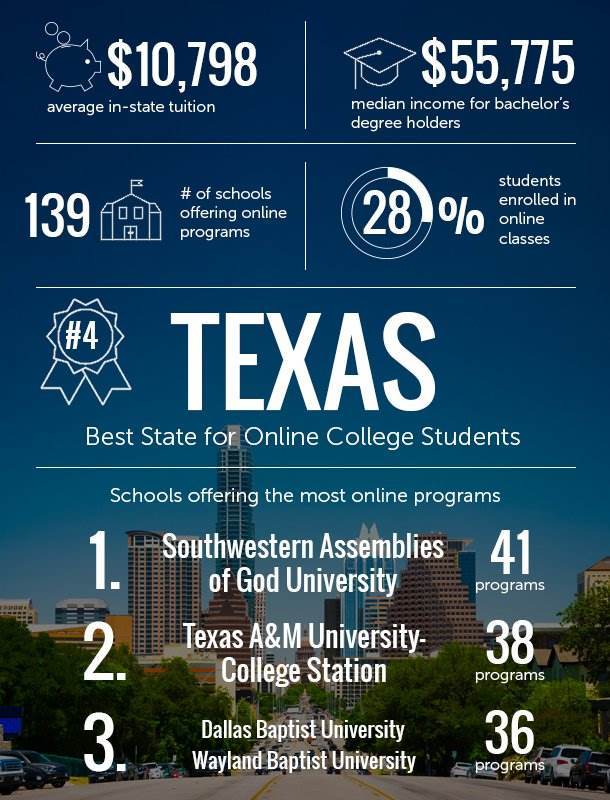 Q: What advice would you give online students in Texas?

A: Recent figures from the U.S. Census Bureau show that Texas boasts five of the nation's 11 fastest-growing cities. Texas is booming. We also know that online students, just like students on campus, have a tendency to be regional. There is something comforting about knowing that your school has a physical campus nearby if you ever need to pay them a visit or you ever want to meet face-to-face with peers or professors. So, growth of metropolitan areas has some effect on growth in online programs as well.

Students often think of for-profit online schools when they start their college search ... but the best choice can often be the school nearest to you. It is great to be close enough to ask to meet your professor in person. Plus many small, private schools now offer online programs. Smaller can often mean more personalized attention for your needs.

Dropping from the second to the fifth spot in the ranking is California. However, the state continues to be a good choice for many online college students. Most notably, California has the most institutions in the country — 172 in all — that offer distance education programs. It has also added 601 distance education programs in the past two years, helping it place second for that metric. What's more, programs such as the California Community Colleges Online Initiative seem poised to make distance learning even more accessible in the years to come. 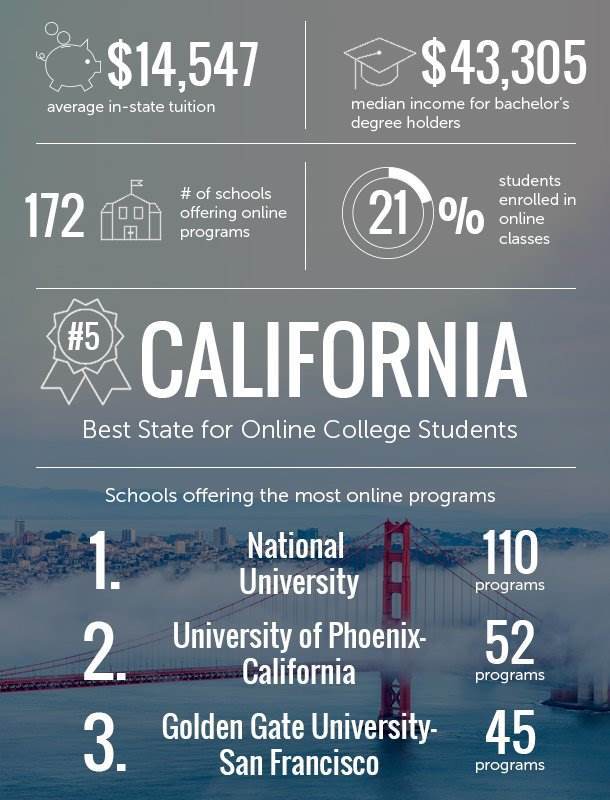 Minnesota makes its debut in the ranking in part because of a boon in distance education offerings between the 2012-2013 school year to the 2015-2016 school year. During that period, the state added 707 programs, making it first in the nation for the numeric change in programs and fifth in the percentage increase in programs. All told, Minnesota online college students can select from more than 1,200 distance education programs. The state is also eighth in the nation for the percentage of students enrolled in those courses. 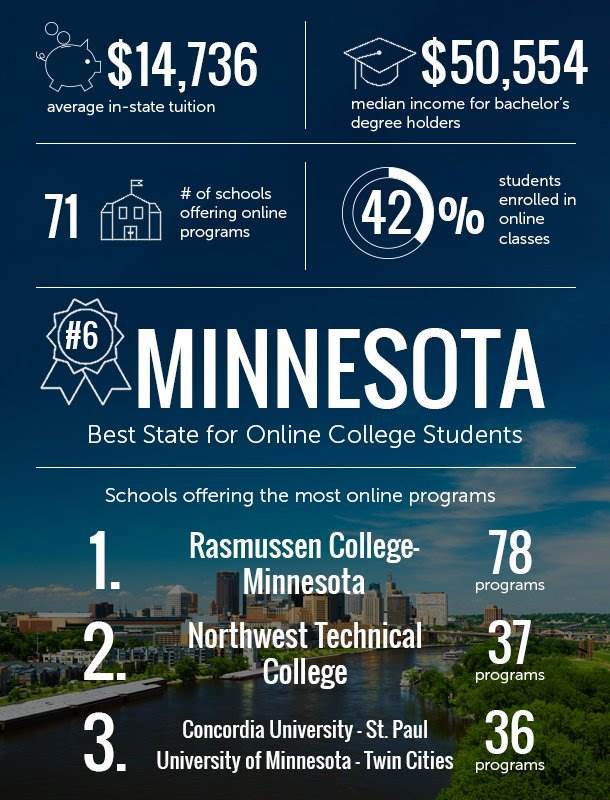 Online college students may also find Georgia is a good place to complete their education. The state ranks fourth for the median income of bachelor's degree holders when cost of living is considered. Its 898 distance education programs in 2015-2016 also garnered it the ninth place rank for that metric. However, there weren't always so many options available. Between 2012-2013 and 2015-2016, Georgia has increased its distance education offerings by nearly 125 percent.

Holding steady from 2015 in the number eight spot is Virginia. One of the state's biggest selling points for online college students is the potential for good wages after graduation. Virginia topped the ranking when it comes to the median income of its bachelor's degree holders when that amount is adjusted for the cost of living. Other highlights for Virginia include its solid placement in the 13th and 14th spots, respectively, for the number of schools offering distance education and student participation. 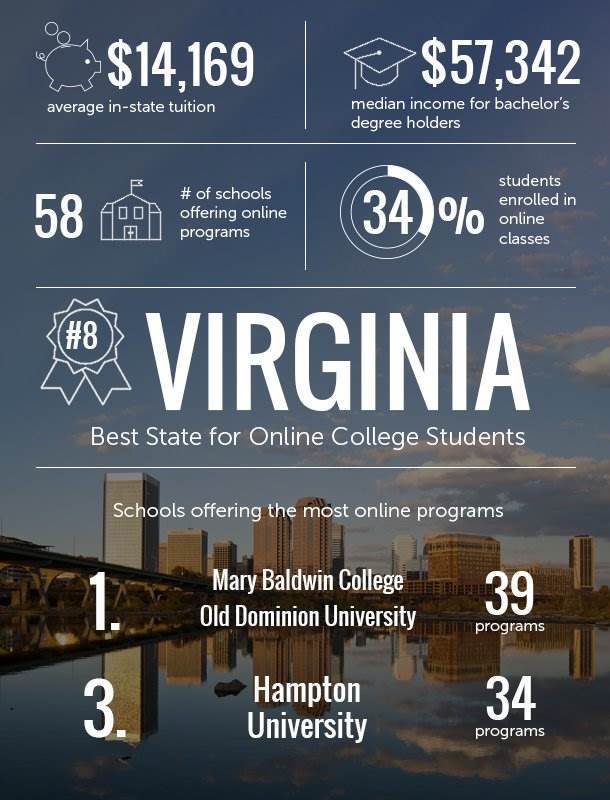 Kansas dropped from fifth in 2015 to ninth on this year's list of best states for online college students. Still, the state pulled in solid rankings in the teens for nearly all the metrics considered in the analysis. Online students in Kansas can choose from 770 distance education programs offered at 52 institutions. In the 2014-2015 school year, a third of those enrolled in the state took the opportunity to study online, helping the state rank 16th in the nation for distance education participation. Going forward, there will likely be even more choices as Kansas has increased its distance education offerings by 65 percent between the 2012-2013 and 2015-2016 school years. 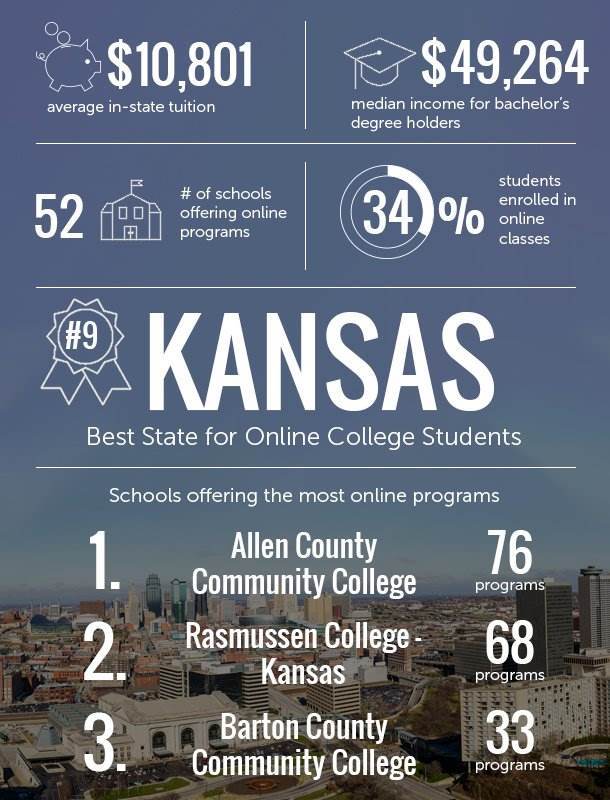 Q: How do you see online learning growing at Allen Community College and in Kansas in general?

A: Online Learning will continue to grow at Allen Community College because we offer a high-quality, accessible education at an affordable cost without sacrificing support. We offer a wide variety of courses to meet student needs. Survey results consistently show that over 94 percent of our students would recommend an online course to a friend or colleague. We also provide free online tutoring for all enrolled students.

Online Learning will continue to grow in Kansas because students from a wide geographic area need conveniently scheduled courses to meet their educational goals. The Kansas Board of Regents and the educational institutions have worked hard to increase the number of courses that transfer seamlessly to all public institutions in the state. Tuition is also very affordable in Kansas.

Rounding out the top 10 is another new addition to the list of best states for online college students. Maryland added 290 distance education programs between the school years of 2012-2013 and 2015-2016. That's a 109 percent increase and places the state as ninth in the nation for that metric. Top subject offerings include programs in business, computer and information sciences, and healthcare. Even students who aren't enrolled yet may be able to sample online education for free. The University System of Maryland recently announced a partnership with the nonprofit edX to offer free online classes to anyone interested. 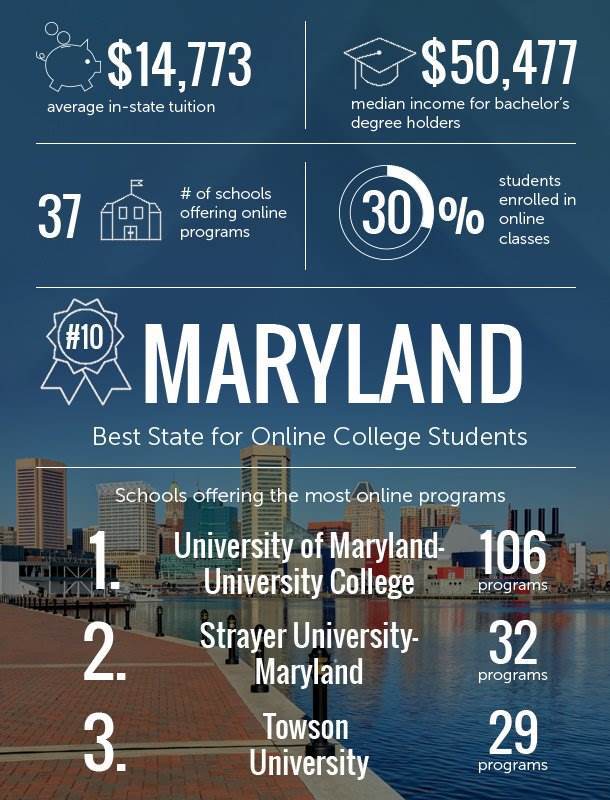 Q: How do you see online learning growing at Towson University and in Maryland in general?

A: Towson University is a leader in online learning. We currently offer 18 post-baccalaureate certificate programs and graduate degree programs. We also provide introductory undergraduate courses, often with numerous sections, in which online learning is pedagogically appropriate. In addition, TU works with Quality Matters, a Maryland-based organization and national leader in the improvement of online education and student learning. The Office of Academic Innovation at Towson University is a licensed site for training faculty in the application of QM standards ... and, with permission from Quality Matters, has created a collaborative process for the standards-based peer review of online courses offered at TU.
Sources
Sources

We ranked all 50 states on eight criteria related to education, economics and Internet access. Each state was scored on the following factors using the weights specified: